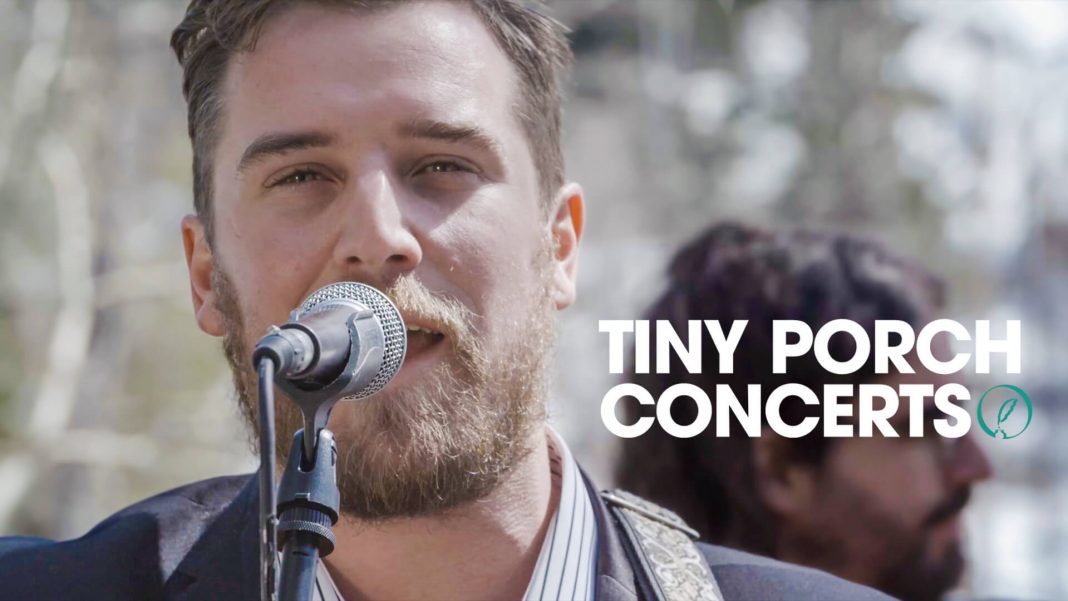 Portland-based Fruition absolutely ruled WinterWonderGrass this year. They shot a video on top of the Palisades for next year’s Warren Miller movie, played a cumulative nine sets throughout the festival, and stopped by the Moonshine Ink office the Monday after the festival to perform John Prine’s Monday Morning as part of our Tiny Porch Concerts series.

A big THANK YOU to our sponsors Dress the Party, Christy Hill, and Truckee Tahoe Brokers.

We spoke with Kellen Asebroek about John Prine, long Mondays, filming on top of the Palisades, and about what is next for Fruition.

Why did you choose to play a John Prine song, rather than a Fruition original? We huddled about it for a second and decided we mostly didn’t want to play an original song because Labor of Love has been out for a year-and-a-half now, and we’ve done all those songs in either a video, interview, or radio format already. It felt excessive if we continued on down the road with original stuff. And, we’re in the middle of making a new album, but it’s a little too soon to be playing any of those songs.

So we thought, “what if we did a cover,” and that John Prine song came to mind — it seemed like such an absolutely perfect song to play because A, it was a Monday, and B, we’re all worn out because of a weekend full of festivities. And the lyrical content of this song is incredibly suited for that situation — your guys’ place on the river and having just come from the mountain where we played this festival and did a video shoot, it all just sort of fell into place.

Fruition filmed a video on top of the Palisades for next season’s Warren Miller movie. How did that whole thing start? Thinking about that day still kind of renders me speechless, but I will do my best. The way it came to be was: Last year during WonderGrass, the Warren Miller crew was at Squaw filming for their new movie [released fall 2016], and they happened to grab some footage of us doing the tram jam and a secret show up on the snow. They also got a bunch of footage of Mandolin Orange and really fell in love with one of their songs and invited them to shoot a video for last year’s movie. It was all pretty rough assembly and spur-of-the-moment.

So Scotty Sutton, who helps put on WinterWonderGrass, and Andy Wirth and Warren Miller folks had the idea to up the ante this year, and wanted us to be involved. They really wanted to use the song The Meaning, which is what we shot up on the mountain, because the lyrics are all about the sky and the breeze. So, they sent the song around to all the Warren Miller folks, and the Squaw people, and the skiers who would be in the movie, and everyone loved the lyrics.

How will the song be included in the movie? Basically the last segment of the movie is an interceptive, interviewy type scene with epic slow motion cliff drops and powder skiing, and the scene is going to be spliced with us on top of the mountain singing The Meaning. So, the song will play and there will be shots of us and shots of skiers doing epic skiing things. And then credits.

What was the experience like? They took us up there in a helicopter — none of us had ever been in a helicopter before, so that was amazing. Since I sing lead on that song they put me out in front on this cliff ledge. Honestly it was a pretty sketchy spot. The first shots they did were these big sweeping hero shots where the camera man was harnessed to a piece of equipment that let him hang outside of the helicopter filming this awesome action movie type aerial shots. The helicopter was getting so close to us that it was a little scary — the propellers make a lot of wind, and meanwhile I’m balanced in cowboy boots on top of a snowy, craggy cliffside about to blow off, and trying to not die.

We did it music video style where we’re lip syncing … it was a trip. It’s the last scene.

So you guys played nine sets at WonderGrass this year. Does that sound about right? I think some of us did. You know, we weren’t all involved in all of the same sets. We only technically had three Fruition sets, but then we sat in with as many friends as we could. Mimi played mando for the Peter Rowen set on Sunday on the main stage, and we all sat in with Brad Parsons Saturday for late night. And I sat in on a couple of the Pickin’ on the Dead sets that Tyler Grant and company were doing.

We always get down whenever we can, that’s why we’re there. Some people are paying to be entertained and some of us are getting paid to entertain and that is why I like to make sure I uphold my end of the bargain.

It seems like Fruition doesn’t come through Tahoe that often. We don’t.

But when you do, a bunch of people come out for the shows. Do have any plans to come here more often in the future? When the routing works on a national trip we usually try and stop in North Lake at the Crystal Bay Club, and we’ve done the show at Commons Beach. I personally would like to get out there more often. They are going to try to bring us back for the premier of that Warren Miller film, so then we’d play the premiere party and get to watch the flick and stuff. Get people stoked — you gotta use ski terms when you’re talking about this stuff. Epic, shred, gnar, sick, sicky-gnar, sicky-gnar-gnar, and so on. I grew up in SoCal surfing and skating my whole life, so I am no stranger to talking like an idiot.

What is next for Fruition? You mentioned y’all are recording a new album, when does that come out? We’re in the studio for a month straight doing two weeks of recording and two weeks of mixing in Portland. Basically, I will have a 9 to 5 job, but will be more like 10 to 8. It is absolutely going to be the best album we have ever made!

And we’ve been keeping the songs under wraps, we haven’t been performing any of the tunes live, so it’s a collection of brand new stuff — really excited.

Do you have an album name? The name of the album doesn’t exist yet. It is very much still in the creation process but the songs are there. We narrowed down the titles to about 15 that we are going to track in the studio and then from that narrow it down to a 48-minute record which is probably about 11 songs. Trying to make it big enough that it fits on both sides of a 12-inch vinyl.

Long Monday Written by John Prine and Performed by Fruition