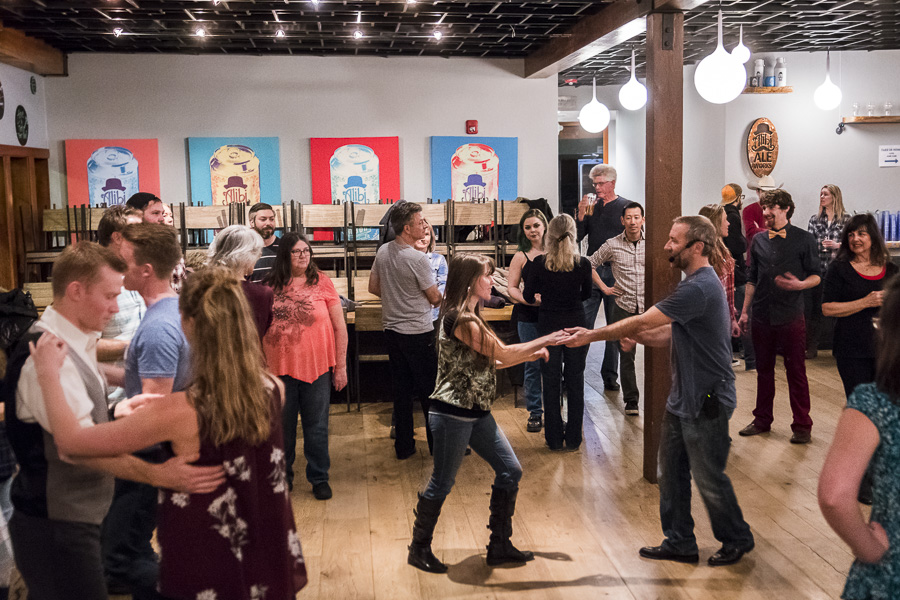 Alibi Ale Works’ monthly swing dancing class mitigates all the factors that might deter you from attending. Their social dancing format makes it so you can show up solo, the teachers start with the most basic moves, and there is beer (liquid courage) available within arm’s reach — oh, and the class (not the beer) is free!
To clarify: I do not have rhythm, I am not a good dancer, and I had an absolute blast when I attended back in December. In fact, my dance “career” ended at a very young age when a drop in hip-hop class went horribly wrong, but I won’t go into that. Regardless, if I can do it, you can do it.

The lesson portion of the evening, which takes place from 7 to 8 p.m., is taught by Jeff Freeman and Michelle Erskine. If I can give you one piece of advice for this evening, it is to get there on time and participate in the lesson, otherwise I can pretty much guarantee you will be totally lost once the clock strikes 8 and open dance starts.

The evening begins with all participants coupling off (don’t panic, hear me out: you really don’t need to bring a partner), and Freeman and Erskine start at the very beginning, teaching the most basic moves, spending no more than five minutes on each move. Then, they add to what was previously learned and the couples rotate for each new move that is introduced.

By the end of the hour-long lesson, participants will have a better grasp of swing dancing from when they walked in, regardless of their level upon arrival. Then, from 8 to 10 p.m., the floor opens to DJ’d swing dancing. Remember, you don’t have to participate in the lesson to dance later in the evening, but I highly suggest it.

I spoke with Freeman about how he got involved in the Portland swing dance scene 15 years ago. In true Portland fashion, Freeman was swing dancing before it was cool. He went into his first class a total novice and it was the promise of pretty women from a friend which finally made him walk through the door.

“I’ve never been bitten by a bug like that before,” Freeman said. He began investing money in the hobby, which would later become a job, taking classes multiple times a week. Eventually he started teaching and opened a dance studio called Vicoustic in Portland. The school offered a variety of dance mediums and had 24 teachers and more than 700 students a month when he sold it after four years of ownership.

Some life changes brought Freeman to Truckee and it was here that he connected with Alibi co-owner Kevin Drake. The two bonded over a mutual love of beer — what else — and came up with the idea for these monthly swing classes to take place on the third Tuesday of each month. The dates are subject to change, however, so make sure to double check before attending.

“Some [dance] teachers focus so much on the details,” Freeman said. “We want these classes to be fun … participants, no matter what their level, will always learn something.”