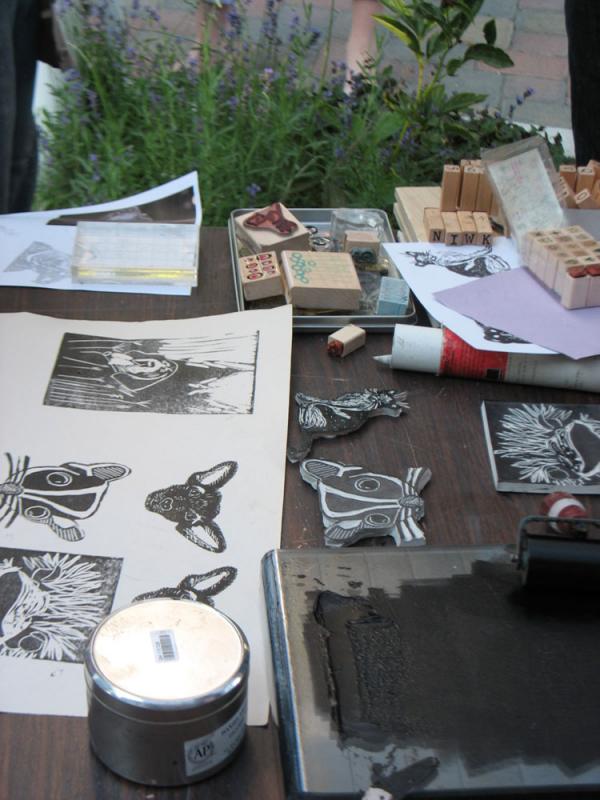 Last month, an amazing thing happened. Heather River, co-owner of Truckee’s Drake & Lulu’s Art Shed, hosted the first class of Brickelltown Crafternoons. A neologism in crafting circles nationwide, crafternoons are the stitch-n-bitches of the handmade world: gatherings in which likeminded folks stretch their creative muscles in unison. So imagine my glee – being the self-proclaimed crafter that I am – when River decided to launch a series of instructional afternoons. And imagine me practically peeing in my pants when I heard Brickelltown Crafternoons’ first instructor would be Mary Kenny, an acclaimed printmaker and Sierra Nevada College art professor from whom I’ve been scheming to take a class (without actually enrolling in school).

Kenny chose to teach us 16 charter Crafternooners linotype printing using a beginner-friendly rubber block. We were encouraged to bring a photo of a pet to print, but since I have no furry animal to call my own I chose the next best thing: a glossy-eyed sugar glider image I had saved from my 2009 Cute Overload desk calendar.

After tracing my sugar glider and painstakingly carving its likeness onto my block (carved areas were to stay white, uncarved spots would be coated with ink), I was ready to print. And this is where it got really fun. I feared my carving skills were mediocre at best, but lo-and-behold, my little glider came out shining. With this surprising success under my belt, I dove into a fever of reproduction, printing on notecards, postcards, rice paper, archival paper and even fabric. Kahlil Johnson from Riverside Studios, who had skillfully carved a rendering of her pup Tulip, even printed on leather, which she intends to make into a clutch.

Yet Crafternoon did not stop there. I’ve since purchased block printing materials to keep me busy all winter, and my sugar glider stamp was so well received that it went on to grace the bandanas of an entire Burning Man camp that I wasn’t even a part of (check my blog for photos).

But I am not some crazed crafter (right?); I am a model student, according to River. ‘I intend Crafternoons to be introductions to achievable crafts,’ she says. ‘Hopefully people can take these basic skills further on their own.’

River plans to host two Crafternoons per month, with instruction on sewing, printing, jewelry-making, book-binding and more (see sidebar for the fall schedule). Come December, River hopes to take our linotype class one step further by turning the printed pets into holiday ornaments. ‘In these economic times, people like to make their own things; there is certainly a resurgence of craft,’ she says.

And there’s no better place to get crafty than outdoors in the Brickelltown courtyard. Stay tuned for indoor locations come snowfall; in fact, if things go River’s way, she’ll be operating a permanent craft school before too long.

~Email the author at lkorb@moonshineink.com. Keep up with Lis and her coverage of the arts at liskorb.com.