Home Sections Arts & Culture Back in the Groove 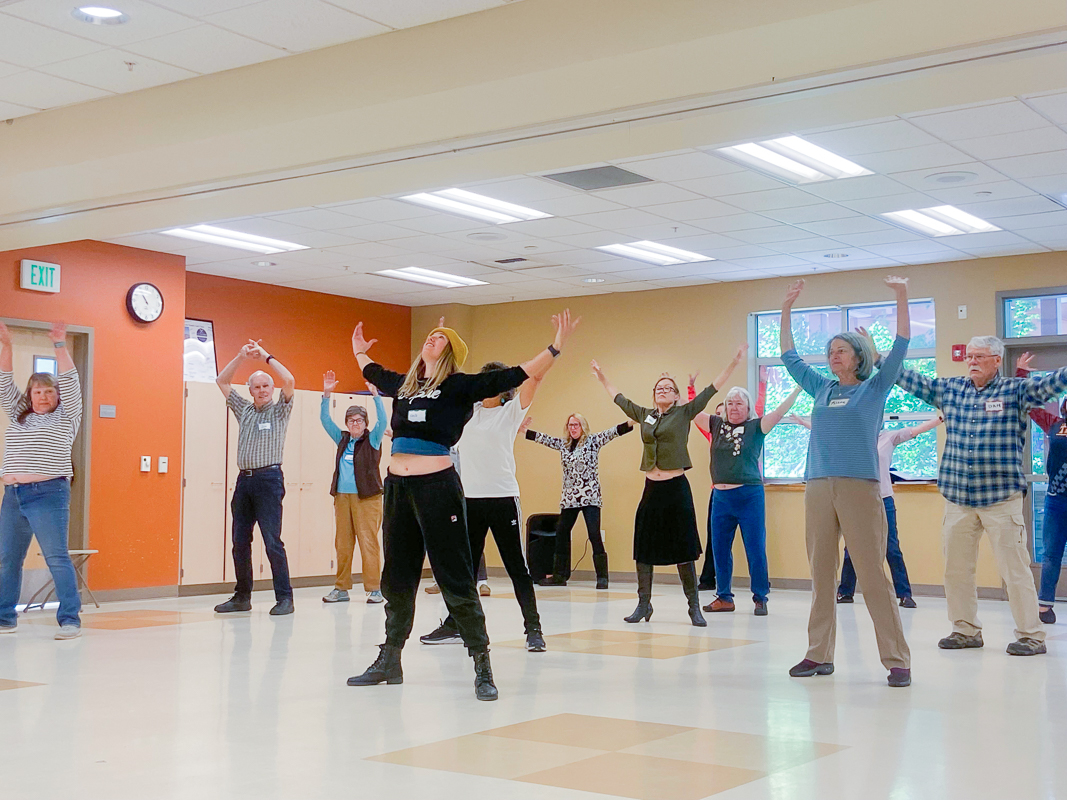 The notes of a piano flow through the speakers as light-on-their-feet dancers glide across the floor. The music stops and starts, replaying again and again as the dancers strive to get their footwork just right. When the class is over, they file out of the studio, the smiles on their faces all the affirmation Sarah Fay needs to know that in reopening InnerRhythms Dance Studio, the timing was just right.

Like so many other businesses across the nation, InnerRhythms felt the pinch of the Covid-19 pandemic as it took hold in spring 2020. Despite the nonprofit board’s best efforts to stay alive, the doors ultimately closed.

“When we made the public announcement on social media, we had a lot of heartfelt responses of sadness, but we weren’t alone. A lot of people were suffering right at that time,” recalled Fay, a former board member and the new executive director. “Trying to keep the studio families and dancers connected became of the utmost importance for many reasons. For the sense of community, for the dancers’ own fulfillment, the joy — and there was so much absence of joy at that time.”

By that fall, InnerRhythms teacher Brandon Greathouse jumped in and reopened the studio as Greathouse of Dance. With Covid health and safety precautions still in place at the time, classes were held outside in the parking lot. As restrictions eased and the weather turned, the classes moved back in-studio and the InnerRhythms dance family was finally able to start coming back together. But as the studio once again began to thrive, so did Greathouse’s career path, which found him being pulled more and more toward Las Vegas. At the same time, Fay, who had helped to keep the InnerRhythms light in the lives of its dance families by offering livestreamed classes during the pandemic closures, was feeling the pull of wanting to revive InnerRhythms.

“There was a critical time over this past summer where [Brandon] and I had a discussion, and I said I really would like to bring InnerRhythms back,” Fay said.

It was one of those moments of destiny, when everything just falls into place at the right time, for all the right reasons.

That was in August, and before long, work was underway to breathe new life into the studio, which has moved one door down from its original location. In her day job, Fay owns Design Bar interior design, which came in handy in completely renovate the new space within about a month’s time, making it possible for classes were able to be up and running by the time September arrived.

“It was like a TV show,” Fay laughed, referencing popular home makeover television shows. “And I tell all my clients — interior design is not really remodeling like what you see on TV. It’s not that fast. This was almost that fast! So, it was challenging.”

It was no small feat, but one Fay knew her installation team, overseen by her husband and business partner Phil Fay, could handle. Neighboring storefront Tahoe Dave’s was looking to expand its square footage at the time renovations were about to begin, so it took over the original InnerRhythms space and the studio moved one door down. Since the ski and snowboard shop’s expansion took over the area with the studio’s spring-bottom dance flooring, Tahoe Dave’s offered to split the cost of the flooring for the new location. With other materials generously donated by both Truckee Tahoe Lumber and Mountain Hardware and Sports, the studio is nearing the final stages of the renovation.

Elizabeth Archer, previous executive director and now president of the board, supports the new iteration. “On behalf of the board of directors, we look forward to engaging in a fresh new vision and getting back to serving the community through the performing arts,” she said.

Staples like ballet, tap, and jazz will be coupled with new offerings like Adult Couples dance, and new instructor Eric Ventura is bringing new, high energy to the hip hop program. Fay is especially excited to introduce Forever Young, a new class for those 65 and older geared toward keeping the local senior population active. Following a hugely successful demo class during the Golden Senior Hour at the Truckee Community Recreation Center, the hour-long class will be held at the InnerRhythms studio every Tuesday at 1:45 p.m. While small donations are welcome at the door, the class is entirely free. There will also be a master class in Theater Dance on Oct. 14 with Broadway choreographer Deb Leamy. Find details online at innerrhythms.org.

“We’re going to really welcome anybody into our dance family,” Fay said. “Even if you’ve never danced before. We have so many classes; it’s a great place to be.”
And that sense of place, of community is what Fay is most looking forward to restoring within the studio walls because she sees InnerRhythms as more than just a dance studio. To her, it’s a place where the students become a family joined together by a common love of dance.

Archer couldn’t agree more. “We are honored that Sarah has chosen to become our new executive director and elated that [she] has come forward to continue the InnerRhythms legacy,” she said. “Sarah’s passion and enthusiasm for all things InnerRhythms is refreshing and infectious. The new studio space is beautiful and welcoming. Dance for everyone!”

Back in the Groove
Arts & Culture
All Day

Back in the Groove
Sports & Outdoors / Wellness