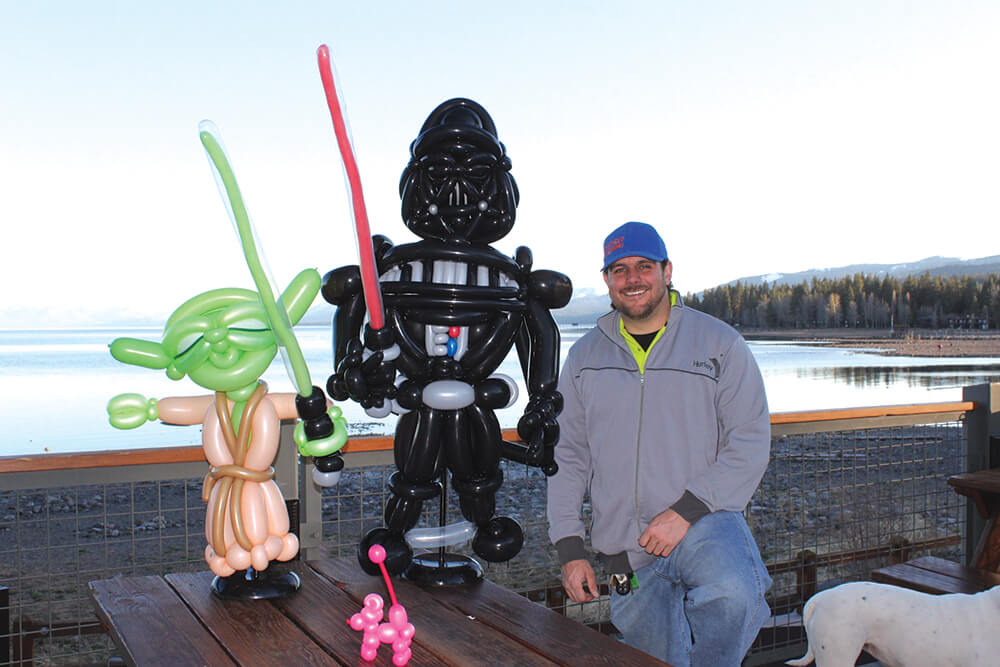 Can balloons be art? I admit I was a bit skeptical, but I soon realized that in the case of Sean Rogers and his Inspired Balloons, the answer is a resounding yes. I recently met Rogers at Moe’s Original BBQ in Tahoe City, accompanied by his newest balloon creations: a stunning 3-foot tall Yoda alongside an even more impressive Darth Vader, who towered over him clad in full black armor.

Countless people snapped pictures of the balloon sculptures, asking Rogers where he got them and gawking when he said he made them himself. Creating life-size balloon sculptures is no small feat; if a single balloon pops the entire sculpture can be ruined. While every detail was accurate and precise, the best part was that Rogers had never actually built Darth Vader before, though he’d wanted to build him for over a year.

“Today felt like a good day,” Rogers said. “I started his face and when that came together well, I figured I can take it to where I want it to be.”

Rogers’ Inspired Balloons expands way beyond traditional balloon animals, crossing the threshold into advanced balloon sculpture. As he’s pursued his craft over the past six years, Rogers’ artistic eye and creativity have pulled him into the ranks of the most talented balloon artists on the West Coast. Rogers didn’t dream of becoming a balloon artist, but one night in 2008 Rogers lost a bet that changed everything.

“It was supposed to be a gag for me to make balloons at a restaurant one night,” said Rogers, who was living in Florida at the time. “My buddy wanted me to fall on my face and instead I taught myself to make balloons in six days. I tried out with Twisted Artz [a Florida-based event company specializing in balloon art] on a Friday, and was booked for Saturday.”

Rogers continued to pursue and learn every balloon art technique he could, and moved to Tahoe City in 2009. He attributes his first large build in Tahoe — Saucerboy for the second annual Pain McShlonkey event at Squaw Valley in 2011 — as a project that truly hooked him on balloon art. As of 2013, balloon art has become Rogers full-time gig, and his Inspired Balloons can often be found at local businesses and events like Truckee Thursdays.

“My goal behind balloon art is to make everything look like what it is supposed to be,” said Rogers. “If I make a lion, it’s gonna roar at you.”

For local events, Rogers recently created an interactive photo booth that he takes on the road, complete with balloon props of all sizes and themes. He also offers themed party packages in addition to building decorations for bachelorette parties, New Year’s parties, and birthdays for kids of all ages. Ever since his daughter was born in the fall of 2014, Rogers has found constant inspiration by spending time with her, though working with kids has always been important to him.

“I look forward to going to work and seeing the stoke kids get from something I created,” Rogers said. “And the parents are thrilled to see the kids happy. That’s what gets me up in the morning.”

Over the past two years Rogers started attending conferences and competitions, meeting some of the biggest names in the business. During the July 2014 Bling Bling Jam in Las Vegas, Rogers stayed up for 30 hours building a life-size motorcycle, complete with shocks, spokes on the wheels, and a seat you can sit on (pictured top left). Even though he was the newest artist to enter the competition, Rogers took fourth place amongst some of the world’s top balloon artists.

“I built the bike with no intention of entering it … At the last minute, I threw [the bike] in,” Rogers said. “To be on that level with those twisters felt like being on top of the world and it was an honor, especially being a newbie.”

Art with a Twist
Education